You are here: Home / History of St Christopher's / The Birth of St. Christopher’s

As early as 1941 Canon Davis had suggested that the Rectory would make a good Residential Home for old people. Maybe he fancied returning there, but sadly he died too early. By 1942 other local clergy and laity had conceived the idea of such a Home as a Deanery War Memorial – a positive, practical project to be put forward. A Home for ‘the aged and infirm’ was envisaged – something like the Bethany Homestead, opened in 1921 for the Baptists and Congregationalists after the First World War.

Canon Trevor Lewis, Vicar of All Saints, was particularly enthusiastic, as was Mr. Agutter. Another great enthusiast was Mr. William Smith of Henry Martin Ltd. (builders) and also the Rev. James Auger of St. Giles; and there was plenty more support by the time a large meeting was called in April 1942 when a Steering Committee was set up. This included:

Regular meetings were held and soon all the parishes in the Deanery were involved. In July, Mr. William Smith (Henry Martin Ltd) offered a 4½ acre site at Spinney Hill and the possibilities were considered by the committee.

The September meeting was the first meeting of the General Council consisting of the incumbents of the Deanery with lay representatives of each parish. In November, Mr. Charles Burton, a solicitor, drew up a Trust Deed to be approved and the first Trustees were named as Mrs. A.E. Jones, Mrs. Sears, Mrs. Martin and Miss Amy Swannell. By February 1943, the dedication of St. Christopher (the Christ-bearer) had been decided upon.

By this time it was apparent that Abington Rectory and its spacious grounds would soon come on the market, though the Rector, the Rev. Herbert Steer and his family still lived there. It was decided that this established site would be more suitable for the projected St. Christopher’s Home and £10,000 was considered the minimum necessary to purchase the property and to convert the house. Messrs. Martin bought back the Spinney Hill land, so that this money was available as a start to the fund.

On June 30th 1944 an Open Meeting was held at the Town Hall, chaired by Bishop Blagden, aiming to raise £100,000 – it was a big meeting with all 21 parishes represented – and was entitled (by the Press) “Peace At Eventide”. It was explained that a series of cottages was envisaged round the main house, all in a garden with a chapel, and that people who came to live there would pay according to their means. The project received great approval – churches like St. Matthew’s, for example, decided to aim at raising £1500, with some parishioners offering, say, 2/6d a month. As time-went on larger bequests were made. All the Trustees contributed. Alderman and Mrs. Coldham were celebrating their Golden Wedding in 1945, and gave a generous contribution to the fund. There were similar donations from others and many generous gifts of goods, furniture and so on. Collections mounted up and – eventually – the War came to an end!

The Rectory was purchased for £10,226 and the necessary conversions were started. Rooms needed to be divided so that they could be shared; fire regulations had to be considered, and all sorts of things had to be purchased:- china, beds, bed- linen, cooking apparatus, a refrigerator, a safe, etc. Wireless was to be installed! As well as using the main house for women residents, the coach house was to be converted into a mens’ annexe.

In March 1950, the General Council met in Church House in College Street, a meeting chaired by Canon Walter Hussey; an Executive Committee and a House Committee were set up, as well as smaller ones to consider Finance, Furnishing and Equipment, Appeals and Publicity, the Garden and the Rules. There was a tremendous amount to consider before the final metamorphosis of the Rectory into St. Christopher’s Home.

By October 1950, £3000 had been spent and it was necessary to appoint staff. A Matron and an Assistant Matron were needed and a panel of three ladies was set up to interview applicants. At the same time the parishes in the Deanery were invited to submit the names of suitable and interested people to be the first residents. 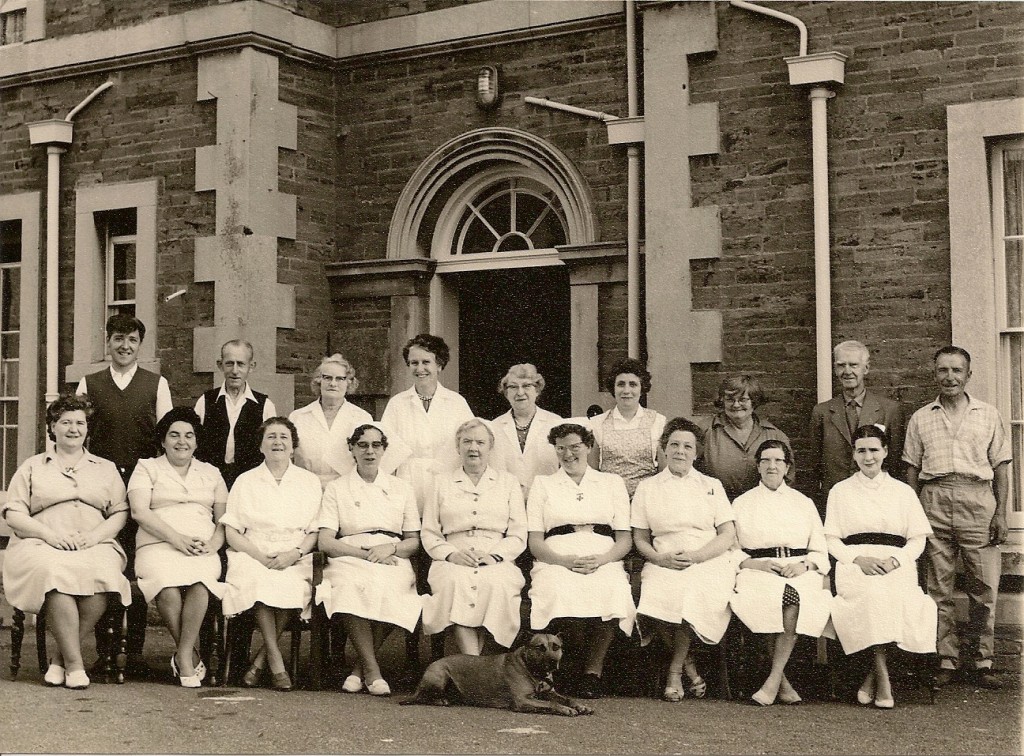 Applicants were expected to be active Anglicans who had lived in the Deanery for five years or more and who were 65 years of age or older. Three guineas a week was suggested as the likely cost but there was a clear policy that every resident’s fees would be assessed according to their income.

Miss Irene Walters was appointed as Matron, at a salary of £250 a year, with Miss D. Berrill as her Assistant, at £170 a year (both with board and residence). The Rev. James Ashworth, Rector of Abington, was the Honorary Chaplain and a cook and other domestic staff were engaged.

An Opening Ceremony was planned for mid-1951, the Bishop and Mrs. Spencer Leeson (Claude Blagden had retired in 1949) agreed to dedicate and open the Home on Friday, May 4th. It was decided to invite around 200 people and to have a marquee where tea would be provided. The Home would be open for everyone to see round it on the following afternoon.

The Dedication duly took place, unfortunately Mrs. Leeson was ill and unable to perform the actual unlocking of the door but her place was ably filled by the Mayoress, Mrs. C.A. Chown, who opened the Home in her place. The Mayor and many other dignitaries were present – though Canon Trevor Lewis was also forced, by illness, to miss the occasion .

St. Christopher’s Home was in business!
Read the next article: The First Years.

Our residents recently enjoyed a Summer BBQ in the gardens of St Christopher's. The weather … END_OF_DOCUMENT_TOKEN_TO_BE_REPLACED

Thank you to everyone for making our Summer Fete on the 29th June 2019 such a huge success. We made … END_OF_DOCUMENT_TOKEN_TO_BE_REPLACED

Thank you to everyone for making our Summer Fete on the 29th June 2019 such a huge success. We made … END_OF_DOCUMENT_TOKEN_TO_BE_REPLACED

We received a lovely piece of feedback in the Northampton Chronicle and Echo this week. This was … END_OF_DOCUMENT_TOKEN_TO_BE_REPLACED

St. Christopher's Care Home Northampton was founded to serve the local community in 1951 it must be … END_OF_DOCUMENT_TOKEN_TO_BE_REPLACED