As part of our series of articles on the History of St. Christopher’s, we look at the Friends of St Christopher’s.

All through the life of St. Christopher’s there have been many “Friends” who have supported the Home, the residents and the staff by giving of their time, their expertise and many gifts. 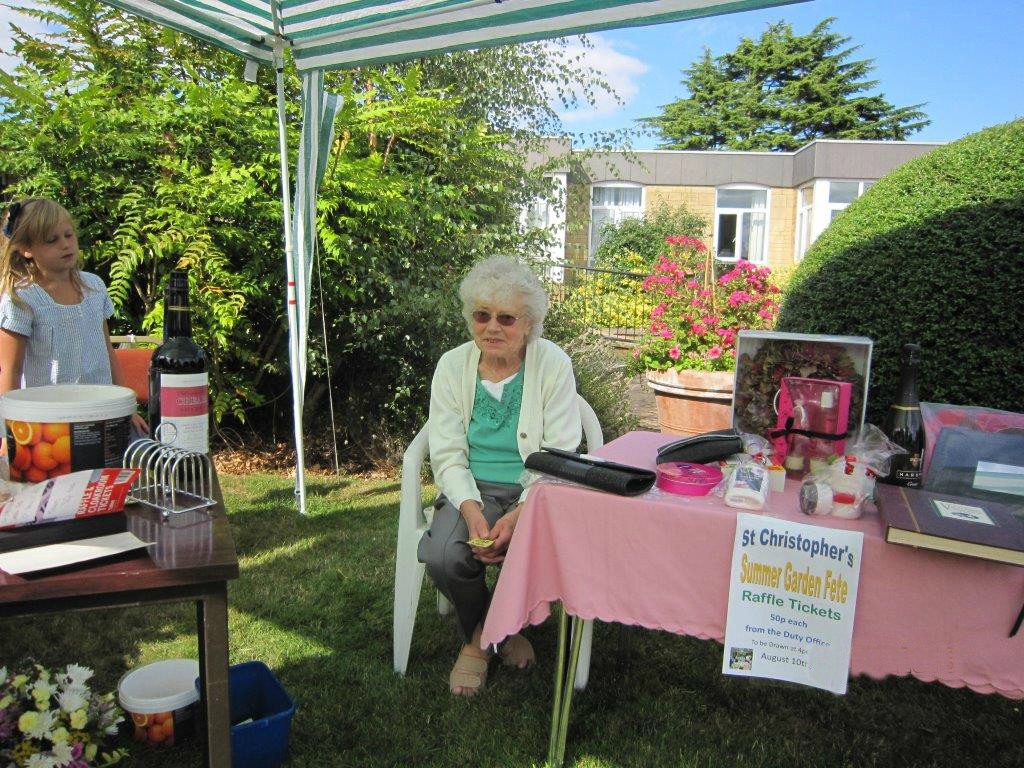 From the beginning, summer fetes and coffee mornings helped to provide money for special projects and helped to make the work more widely known amongst the parishes. Various parish activities have helped and many individuals came regularly to serve teas, especially at weekends; arrange flowers; run activities and provide entertainments. Obviously the individuals themselves changed as time went by and some became residents themselves as they grew older.

After June Hirst became Superintendent, she decided to provide a new focus for such help. An evening party was held on June 10th. 1985 to say “Thank you” to the voluntary helpers who came regularly, in all weathers, to serve teas and to wash up. Mrs. Hirst suggested that a “Society of Friends Of St. Christopher’s” be formed.

Mrs. Mollie Hyams called an inaugural meeting later and the Society was set up. The main aim being “the sustaining of a high quality of life for the residents of St. Christopher’s Home, especially as regards human contact, social support and friendship”. A tea party was held in July and a party of twenty were later taken to see “Annie” at the Royal Theatre. A Coffee evening with stalls was held on the following evening and this raised £1,268 for future use by the Friends.

October saw a bingo evening and November a social evening with a musical entertainment. A festive Christmas Party rounded off the year with tea, games, and carol singing. So the Friends got off to a very good start.

By 1988 there were over fifty members – the Annual General Meeting was preceded by a Eucharist Service and there were the Summer and Christmas parties when the Friends served the  residents with a sumptuous tea – and there was again the Annual Autumn Coffee Evening which was the only Fund-raising event.

In addition to these main occasions, the Friends held regular morning coffee parties and organized social evenings; afternoon entertainments and some coach outings. Throughout the years, outings have included a visit to Frost’s Garden Centre near Woburn Sands; and Poddington Garden Centre near Bedford. Also to the Old Dairy Farm at Upper Stowe. Visits have been made to pantomimes, to Turner’s merry-go-round, Rockingham Castle and a Garden at Luton. Sometimes an outing was just to see the countryside and the villages in their summer glory. Evening entertainments included the Vogue Singers and the Ladies Orpheus Choir and many others. Sadly Mrs. Hyams died in the summer of 1992 and her Chairmanship was continued by Mrs. Elizabeth Akister and in 1994 she was followed by Mrs. Diana George – Mrs. Mary Bird has been their busy Secretary.

The Home owes a great deal to the “Friends” and the residents continue to be most grateful for all that is done for them.

Return to the History of St. Christopher’s main page.

Our residents recently enjoyed a Summer BBQ in the gardens of St Christopher's. The weather … END_OF_DOCUMENT_TOKEN_TO_BE_REPLACED

Thank you to everyone for making our Summer Fete on the 29th June 2019 such a huge success. We made … END_OF_DOCUMENT_TOKEN_TO_BE_REPLACED

Thank you to everyone for making our Summer Fete on the 29th June 2019 such a huge success. We made … END_OF_DOCUMENT_TOKEN_TO_BE_REPLACED

We received a lovely piece of feedback in the Northampton Chronicle and Echo this week. This was … END_OF_DOCUMENT_TOKEN_TO_BE_REPLACED

St. Christopher's Care Home Northampton was founded to serve the local community in 1951 it must be … END_OF_DOCUMENT_TOKEN_TO_BE_REPLACED