As part of our series of articles on the History of St. Christopher’s, we look at the history of the Chapel.

The original concept was of the Home including the building of a Chapel. From the very beginning the Rev. James Ashworth, as Chaplain, held regular services but these were held in the sitting room. The Rev. C.H. Beedle and other clergy held Holy Communion services on Special Days, and Evensong was held on Tuesday evenings, usually once a fortnight.

The Rev. Hilary Davidson remembers taking services when he was an assistant curate at Abington, he usually let the residents choose the hymns, but that had its snags. One lady always wanted. “We are soldiers of Christ who is Mighty to Save” which was very long and ‘military’. It brought grumbles from some of the others though they rarely got in first with an alternative! When the Care Wing was built and linked to the house by a corridor, there was a ‘quiet room’ which was used for a Eucharist service and so became a ‘temporary chapel’. The need for a permanent chapel was raised on many occasions. At the time when the bungalows were being built, an extra room for a sitting room was built at the end of the Care Wing, freeing the previous one to be used as a 3-bedded ward for men. When Mr. William Smith died in 1960, a silver cross, candlesticks, chalice and paten were purchased in his memory for use in the Home and later, a silver wafer box and two decanters were given in memory of Mr. Harris. Services were frequently taken on Special Days by Bazil Marsh when he became Archdeacon.

It was in 1978 that the topic was raised yet again and. it was suggested that the Care Wing sitting room could be made into a permanent chapel. Twenty-one stacking chairs were purchased. A lectern was available but there was need for an altar, a credence table, new vestments and also some new form of heating. A new opportunity for those who wished to make gifts to the Home, particularly gifts in memory of past residents, or friends of the Home. Vases were given and an alms dish, and new vestments which were used and blessed on Christmas Day. In March 1980 Canon Tibbs dedicated a new credence table. Another acquisition was a cassette player for use in the chapel to accompany the hymns, and Bishop Franklin dedicated a pyx. 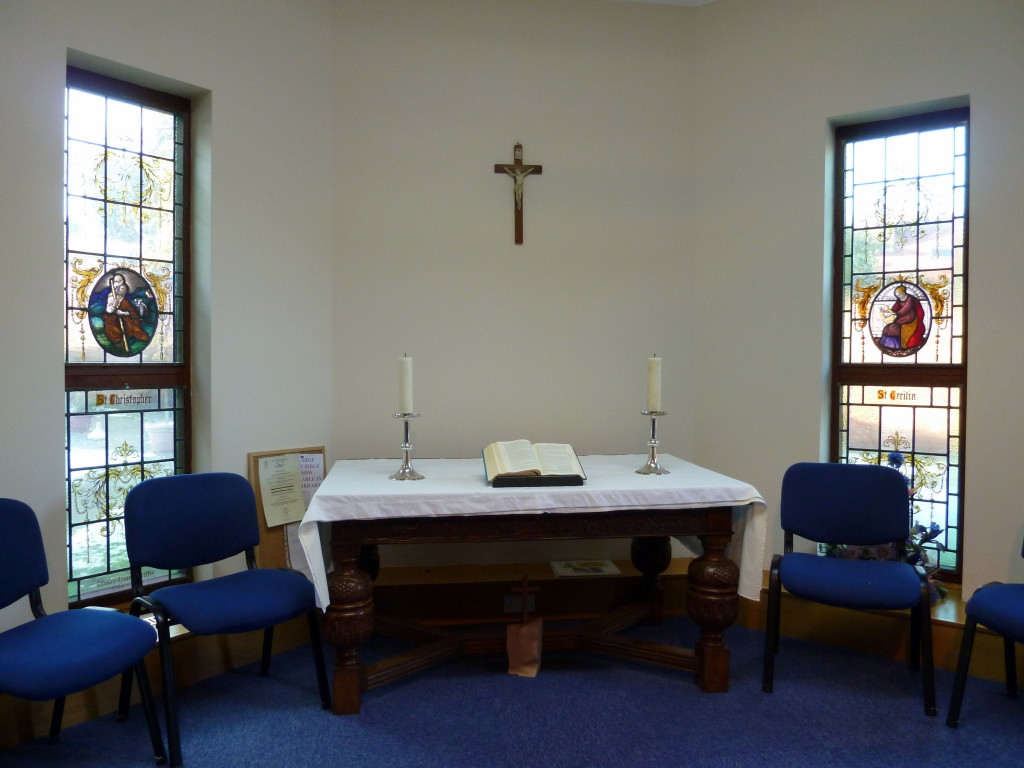 The Chaplain was soon pressing for a Vestry and an Aumbry; a Crucifix and (maybe) an organ. By 1982 the Rev. Frank Pickard was Chaplain and remained so until he left Abington in 1996. He was anxious for an Assistant Chaplain to be appointed but though various suggestions were made (mostly of retired clergy) no one was appointed. Various Abington curates helped and clergy of the Deanery took Evensong each fortnight. Father Earle was very helpful when he was able and other clergy residents, like Father Somes, played an important part in maintaining services and helping in the religious life of the Home.

It was decided to extend the room so that the Chapel would be less overcrowded and so that it could be properly furnished. This was done and the ‘new’ Chapel was ready to be re-dedicated on February 15th 1986 by the Lord Bishop of Peterborough. At the service with the Bishop were Archdeacon Bazil Marsh; the Rev. lan Hunt, with the Rev. Michael Tomkins (acting as Deacon) and the Rural Dean – the Rev. John Norton, sitting in the Sanctuary, and other clergy, including the Chaplain, nearby and a full congregation. The Bishop blessed the Chapel with holy water and candles were specially lit on the altar. There were forty places, although still a little close together, but it was really a Chapel and only used as such. Canon Tibbs continued to officiate when the Chaplain was on holiday. A need was felt for a Eucharistic Assistant, the Bishop gave permission and Mr. Fred Smith was appointed. During this first year in the extended Chapel, a Sanctuary Lamp was given, as well as a Prie-Dieu in memory of Canon Trevor Lewis, who had been one of the first to suggest that the Home be founded.

In 1986, for a time Father Earle took an 8 am. service on Sundays and Mr. Swannell was appointed as a second Eucharistic Assistant. The ‘nave’ was carpeted and stools purchased. The ‘Apse’ was made as a Sanctuary and unwanted vestments from St. Lawrence’s were given; these came via Canon Tibbs. A completely new set of white vestments were given and an Aumbry and Sanctuary Light were obtained. Eventually a separate room was made available as a Vestry/Sacristy. In 1988 a small piano was given by the Watkins family.

By 1990 an amplifying system and an Induction loop were available; Frank Pickard and his sister gave silver jugs, a chasuble and a stole in memory of their mother who had died in August after some time as a resident. In 1991, two stained glass windows were placed in the apse. One in memory of Fred Smith and the other from Miss Newton. It was felt that, now the Chapel was properly equipped, it could be available for the funerals of residents, should the relatives wish it, and one of the first to make use of the opportunity were the friends of Miss Patrick.

The 30th of June 1992 was an important day when the Lord Bishop, William Westwood, cut the first turf of the new extension. This was to consist of sheltered housing in the form of sixteen self-contained flats. Also there was to be a new Chapel, eventually dedicated to St. Ragener, Martyr and Saint of Northampton, reputedly buried in St. Peter’s Church in Northampton. The Chapel was to be at the end of the South Wing and was to have seats for ninety people. 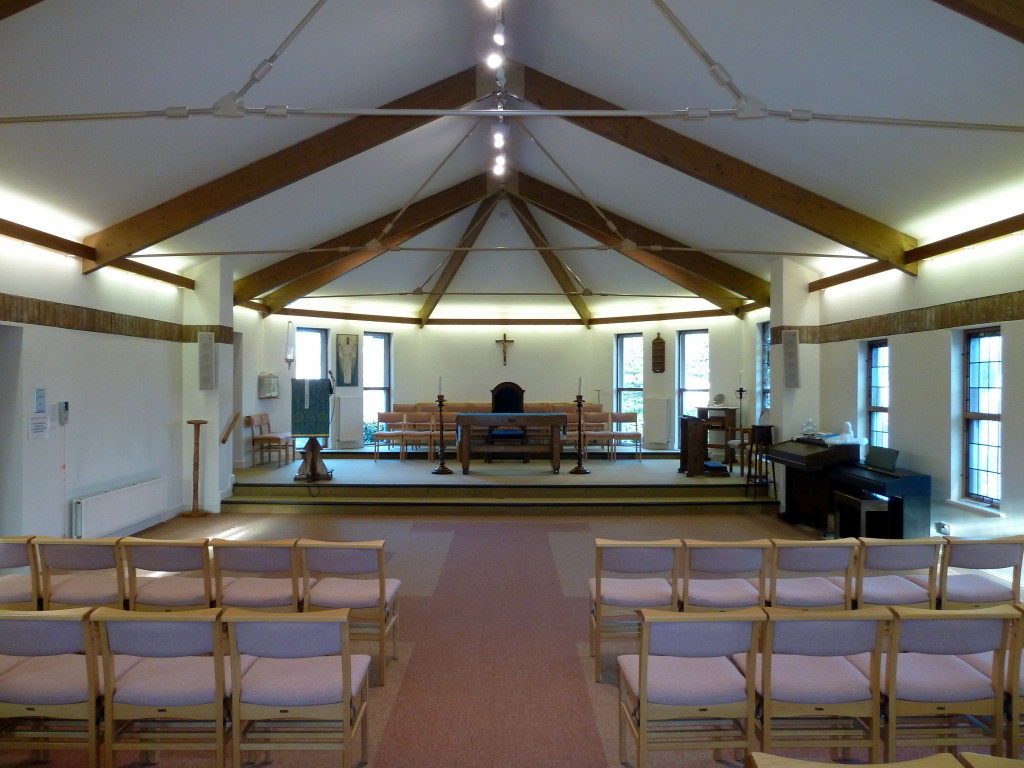 In the meanwhile consideration needed to be given to the future of the first chapel – to be the ‘old chapel’. It was decided that the Sanctuary should be screened off in some way and then be available as an Oratory. It would be convenient for private prayer or to be used by those in the Care Wing who were unable to be taken to the new chapel. Many of the fittings could be incorporated into the new scheme – the Dedication of which was fixed for Friday 25th March 1993. It was thought that the stained glass could be moved, but there were some problems over window sizes; this could have been adjusted but when asked, the donors of the windows wished that the glass should stay as it had been designed.

The new chapel had a very commodious vestry with plenty of drawers and cupboards. At Canon Pickard’s suggestion, long hanging cupboards were put in so that the vestments could be kept in them. Special chairs were bought to go with the new two-tone carpet, which was said to be wheel-chair friendly, on the carpet design, the darker tone was said to be based on a Jerusalem Cross.

The chapel is simple and is light and airy, so that the congregation can be conscious of the outside world as well as the inside. It is well lit with concealed lighting and spotlights – fluorescent but warm.

Read the next article: St. Christopher’s in the Eighties.

Our residents recently enjoyed a Summer BBQ in the gardens of St Christopher's. The weather … END_OF_DOCUMENT_TOKEN_TO_BE_REPLACED

Thank you to everyone for making our Summer Fete on the 29th June 2019 such a huge success. We made … END_OF_DOCUMENT_TOKEN_TO_BE_REPLACED

Thank you to everyone for making our Summer Fete on the 29th June 2019 such a huge success. We made … END_OF_DOCUMENT_TOKEN_TO_BE_REPLACED

We received a lovely piece of feedback in the Northampton Chronicle and Echo this week. This was … END_OF_DOCUMENT_TOKEN_TO_BE_REPLACED

St. Christopher's Care Home Northampton was founded to serve the local community in 1951 it must be … END_OF_DOCUMENT_TOKEN_TO_BE_REPLACED