As part of our series of articles on the History of St. Christopher’s, we look at The Millennium Years – 2000 and 2001.

The year 2000 followed great change and to herald Millennium Eve, on the stroke of midnight, fireworks exploded and a miniature party was held in the Cedars. The residential accommodation in the ‘Continuing Care Wing’, now known as The Cedars (from the great tree which had survived the digger’s activities and which was beautifully pruned and sculptured by tree surgeons in 2001) – was all occupied now and the temporary approach tunnel removed. 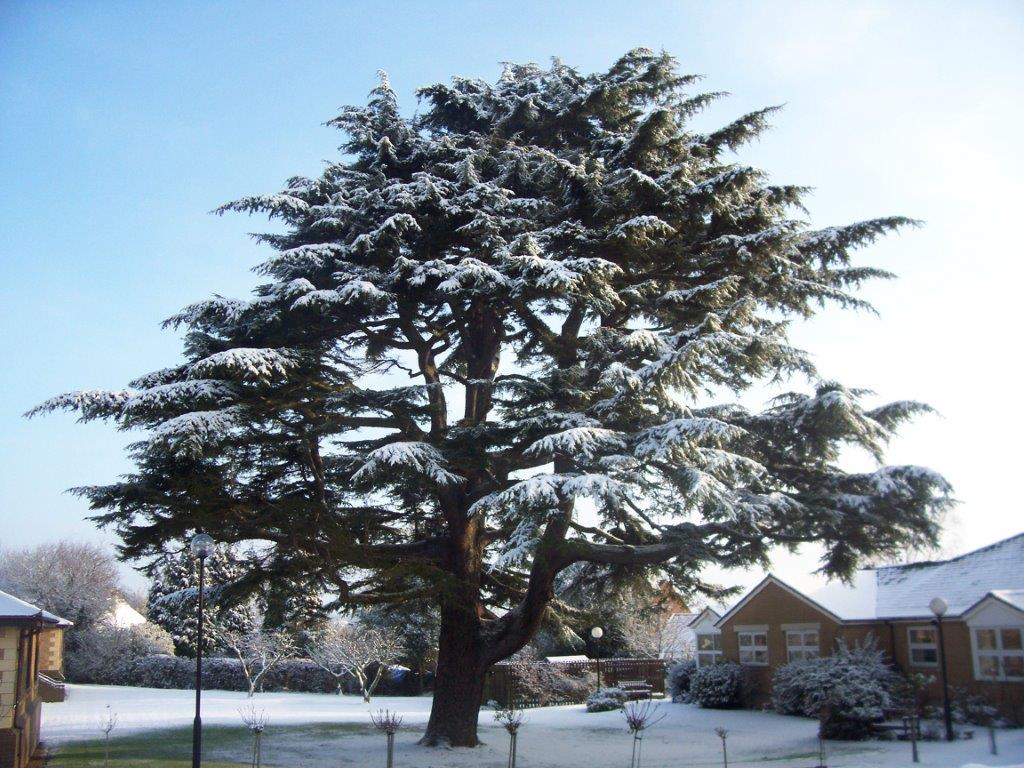 The old ‘care wing’, now The Beeches, had become seven rooms facing the gardens, with three opposite facing the outer old stone walling; all with their own en-suite facilities. These new rooms were occupied by the residents who had been upstairs in the old Rectory. The old North Wing, now The Elms, had been improved for the original occupants to return.

There was also a new car park and a brand new entrance, well-lit and with chairs available, making an attractive foyer to the new Duty Office.

After a brief respite, work started again on the upstairs rooms of the original house. A good deal of re-organisation was necessary because of the different floor levels and because the external appearance of the listed building had to be maintained.

Access by a lift had already been put in and the stair lift was extended to reach the first floor. The existing ten rooms had become eight in number, all with en-suite facilities, and a bathroom. A ninth room was built in the courtyard (over new ground-floor storerooms). During the early months of 2001, these rooms became occupied and were known as The Hollies.

The pastoral care of St. Christopher’s was now in the hands of Rev. Stephen Adams, who had replaced Canon Frank Pickard some three years earlier. He, in turn, is now joined by a new Assistant Curate, Rev. Guy Scott, who was priested at Petertide 2001. Both have become integral to supporting the spiritual life of the Home.

Both day and night staff were increased – the nylon overalls were gone and replaced by a smart new uniform of green tunic and navy trousers! Numbers of residents had also increased; many more dependent residents now being admitted. A room for respite care additionally had been set aside. There was increasing need, too, from residents in sheltered accommodation for buying into the Home’s meals and laundry services. Those residents whose accommodation was in The Cedars mainly had their meals in the second Dining room/Lounge in that building.

2001 was a momentous year as it was the 50th anniversary of the opening and dedication of St. Christophers Church of England War Memorial Homes. The ‘Friends’ proposed that a corner of the garden, on the south-facing lawn, should be paved over, provided with seats and plants and shrubbery and centred with a fountain to splash down three basins into a pool of water-lilies. This to celebrate our Golden Anniversary. Stephen Clamp, our Gardener, suggested an Anniversary Rose Walk, near the Cedar Tree, with standard roses bought by residents who wanted to contribute. These are already well in flower.

In 2001, some 250 attended a service taken by the Rev. Stephen Adams, the Chaplain and Rector of Abington; the Rev. Kevin Ashby, the Rural Dean and Rector of Billing. The Very Rev. Paul Barber, the Bishop of Brixworth, preached the sermon to an attendant congregation, and the Rev. Simon Godfrey, Rector of All Saints, Northampton, read from ‘The Spirituality of Old Age’ by Metropolitan Anthony of Sourozh.

The Abington Church Choir accompanied the hymns and sang an anthem. Other readings were given by Jim Putsey, a resident in St. Martin’s Courts, and Christine Church, the Home’s Manager. During the service, presentations were made to various retiring members of the Development Committee – Stephen Billings; Graham Fordyce; Jean Smith; June Hirst and Canon Kentigern-Fox. Special recognition was given to Mr. Leslie Salt for his many years of loyal service to the Home on various Committees, but especially for his Chairmanship of the Finance Committee, which had steered the Home’s funds in meeting the costs of all the development work over the years. 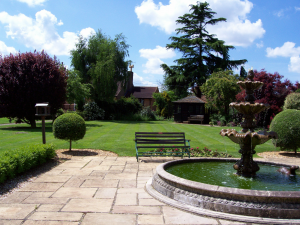 Thanks was also given to the Bishop and Mrs. Barber for their support of the Home. Mrs. Barber was presented with a small token of appreciation, as was the Rural Dean, about to leave to take up a new post in Buckingham.

Bishop Paul then led the congregation from the marquee to the fountain, which was duly switched on, and he re-dedicated and blessed the Home and the fountain, and wished everyone well. We then moved back into the marquee, which had been transformed into a buffet with seating; or the choice of a number of dining areas in the main building.

So, St. Christopher’s enters its second half-century. The original Rectory has grown tentacles, flats and bungalows have been built. The original 21 residents, some of whom shared rooms, has increased to around 100 and no-one has to share a room! What would the founders think now?

We hope they would be pleased and extend their blessing to St. Christopher’s Church of England War Memorial Homes for its second half-century. 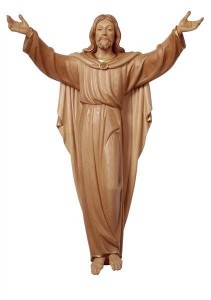 Now there is another thing which belongs to the present. It is a fact that as we grow old we may well become dependent because we see badly or because we lose our mind or because we are physically handicapped or because we are seriously ill. And so often old people say: “Why don’t I die? I don’t want to be a burden to others” That is something we should never allow to be passed unanswered because it signifies hopeless-
ness. If you believe you are just a burden, there is nothing else for you to do other than to kill yourself or let yourself die. But you are never a burden if, (and there are two “ifs”). If people love you, you are not a burden. They have the joy and privilege of looking with tenderness, concern and intelligence at someone whom they have loved all their lives; and though the word is perhaps ugly, the opportunity to repay all that this person has done. A mother has looked after her children for years; now it is the privilege of the children to look after their mother. But not unconditionally; and this is the second “if”!

If you are an elderly person who has become dependent on the tenderness, the love and faithfulness of those around you, you must make it easy and possible for them. You must learn to accept what you are given graciously, and to make of the relationship of giving and taking a feast, and not a calamity for both of you. And you know, to be able to receive graciously, gratefully, joyfully is an art which we do not always possess. Even in short illnesses, people are not always capable of doing it, but in longer periods, like ageing, it must be learned and learned soon. We must know that this happens and to be at the receiving end can be a devastating thing, or an immensely rewarding one. One of the Psalms says, “How shall I repay the Lord for all his benefits?”. And the answer is, “I shall accept the cup of salvation and sing His praises unto His cause”

To accept the gift with joy, open-heartedness, with shining eyes, giving tenderness in response to tenderness, is not only the best, but the only way of making the giving as easy as possible. On the contrary, when we receive with a cramped heart it says: “I would fain receive nothing from you, but I am a victim of my rheumatism or my illness or my age, so I must depend on you!” Thus we can transform a love relationship into something which is full of bitterness.

It is a schooling we must give to other people when they are ageing, and a school we must go  through ourselves as soon as possible, because we all depend on one another’s love, whether we  are children, grown-up people, married, single or old.

Read the next article: The Friends of St Christopher’s.

Our residents recently enjoyed a Summer BBQ in the gardens of St Christopher's. The weather … END_OF_DOCUMENT_TOKEN_TO_BE_REPLACED

Thank you to everyone for making our Summer Fete on the 29th June 2019 such a huge success. We made … END_OF_DOCUMENT_TOKEN_TO_BE_REPLACED

Thank you to everyone for making our Summer Fete on the 29th June 2019 such a huge success. We made … END_OF_DOCUMENT_TOKEN_TO_BE_REPLACED

We received a lovely piece of feedback in the Northampton Chronicle and Echo this week. This was … END_OF_DOCUMENT_TOKEN_TO_BE_REPLACED

St. Christopher's Care Home Northampton was founded to serve the local community in 1951 it must be … END_OF_DOCUMENT_TOKEN_TO_BE_REPLACED