You are here: Home / History of St Christopher's / A Challenge for St. Christopher’s

From a number of applications for the post of Matron, Mrs. Margaret Watker of Little Billing, who had been a relief sister at St. Edmund’s Hospital, was the candidate the Committee wanted – but being married and with a son living at home she was not prepared to ‘live-in’. However, there was one obvious solution, she and her husband could live at Rectory Cottage and, eventually, this proved agreeable to everyone. 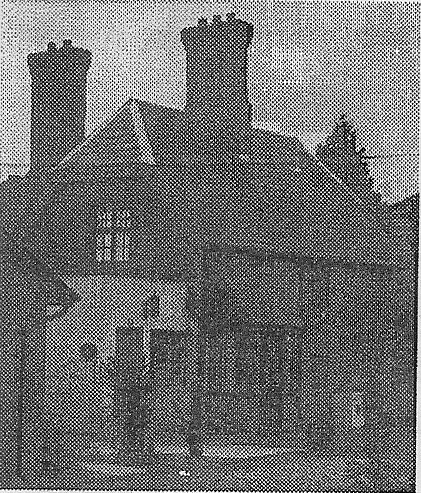 Mrs. Watker remembers accepting what she felt was a “challenge”! The Home had expanded; the atmosphere was good; the residents seemed happy and there was a waiting list, but the 1970’s were approaching and much needed modernizing. Fire regulations led to the building of escape ladders and a new fire alarm system was installed. The use of the Care Wing was tightened up – it was intended primarily as a refuge for the Home’s residents and must not be used by doctors or welfare workers as a dumping ground for their difficult patients. Rooms were gradually re-organized to give residents private bed-sitting rooms as this became possible, and new residents were encouraged to bring some of their own furniture and other belongings.

A new gardener was Reg Phillips – who also did bits of decorating and useful jobs indoors. New gas cookers were installed; a deep freeze; a new TV. Attempts were made to brighten rooms, with new bed-covers, curtains and rugs.

A new Assistant Matron in 1970 was Miss J. Hockey. Staffing arrangements and salaries were reviewed. A telephone, available to residents, was installed (though no private telephones were yet allowed).

Throughout the life of the Home, and earlier, the lowest field of the original close had been rented out as a Sports Field. In 1970 this was leased to the Education Committee for the new Abington Vale Primary School. This was a great improvement on the football club which had had it before and had been lax about paying rent. In 1971, the giant Wellingtonia Fir which had stood on the top lawn was struck by lightning and had to be cut down. It had fallen on the South Wing, being dangerously near, but luckily no one had been hurt. 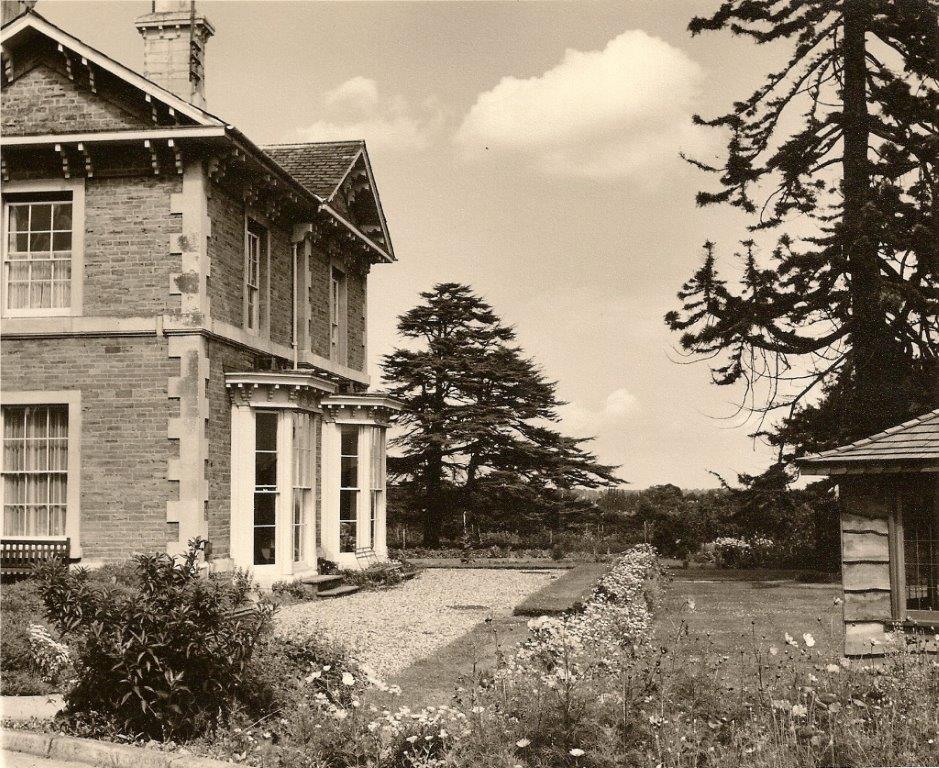 Applications for the flats in 7 Abington Park Crescent were being received; storage heaters were to be installed, with the new occupants contributing to their cost.

1972 was the 21st. birthday anniversary year of the Home and a wing of four new bed-sitting rooms were built across the bottom of the South Wing in celebration with a further room added the following year. It was in this year that the Home lost Mr. Charles Mumby’s services as Hon. Solicitor. He had succeeded Charles Burton in 1954 and had been a pillar of the administration and had been one of the Trustees.

In 1973, Mrs. Sharnwood’s 100th Birthday was celebrated in great style – the Home’s first centenarian. A very active lady who had lived in Rushden, she had come to the Home in 1970. She had telegrams from the Queen; the Prime Minister and the British Legion President and the Minister for Social Services and ten pounds of beautiful grapes from the Cape Grapes for Centenarians. She had been active in the British Legion and still went to services and she regularly knitted blankets for the Save the Children Fund. She continued to live in the Home until her death in 1980.

Mr. George Moss died in 1974. He was by then living in Bungalow 2. He had been Secretary for many years. A fund was set up in his memory, from which some much needed wooden garden seats were purchased. By now, Mr. Watker was the gardener, doing an excellent job and still providing all the fruit and vegetables – much earlier, the Finance Committee had costed out their production but decided that it was cheaper – and better – than buying in garden produce from outside. By now residents were allowed their own portable television sets, if they wished, at a small extra charge – and there was some increased pressure for private telephones.

1976 was the Silver Jubilee and an informal party was held in December which all reckoned to be a great success. Life continued with the usual changes in staff and residents and minor changes; reorganisation and new acquisitions. Fire-doors were put in. The Rev. Frank Pickard became Rector of Abington in 1977 and Mrs. June Hirst joined as wages clerk.

A big garden party was held in 1978 to raise money, particularly for the newly-accepted project of the Chapel. £1160 was raised – another such party was held the following year.

The Council believes that it has a moral duty to extend the capacity of St. Christopher’s Home to meet the needs of more retired people – but it must remain a real family home.

It was in this year that Mrs. Marta Sharwood died aged 106, a truly remarkable lady and also the year when another retired clergyman, the Rev. J. Somes became resident in the annexe and became an active member of the ‘family’ – helping with services when he could. But it was also the year when Margaret Watker announced that she wished to retire as Matron the following year. However, in August 1981, there was celebration when Mrs. Alice Sharpe became the second person to reach her centenary, and she had telegrams and parties and the congratulations of the Mayor. 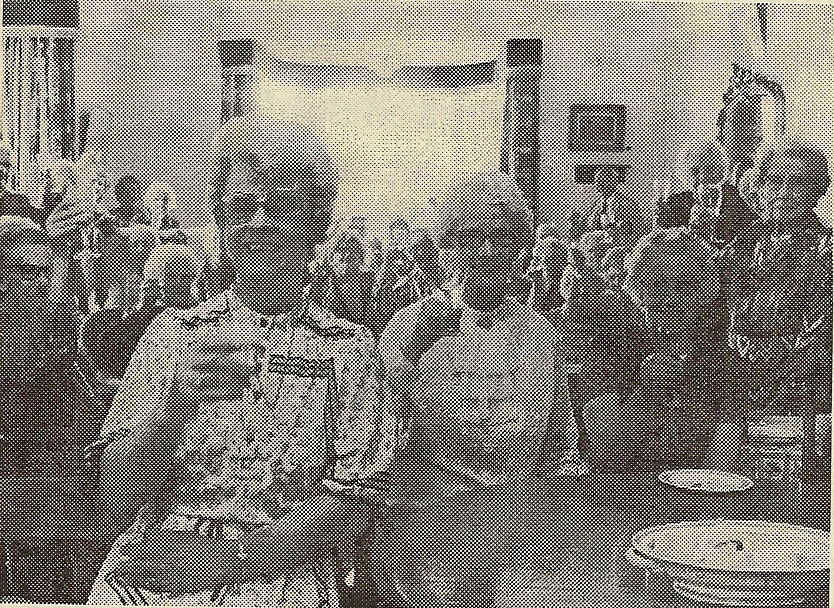 On July 1981, a retirement party was held for Margaret Watker to celebrate 13 years as Matron. She was given a number of presents. 87 Year old Mrs. Etta Pebody, who had lived longest at the Home, said: “There have been a lot of alterations and additions since Matron came – new carpets and furnishings – everyone has the privilege of their own bed sitting room and we have our lovely little chapel”. Reference was also made to the outings and entertainments that Mrs. Watker had arranged. Mrs. Watker said that she would work part-time until a replacement was found and that she would miss her ‘family’. The staff were also thanked because as Mrs. Watker said “without them I could not have run the Home – we have all tried to make it a really happy place”.

Read the next article: The History of the Chapel.

Our residents recently enjoyed a Summer BBQ in the gardens of St Christopher's. The weather … END_OF_DOCUMENT_TOKEN_TO_BE_REPLACED

Thank you to everyone for making our Summer Fete on the 29th June 2019 such a huge success. We made … END_OF_DOCUMENT_TOKEN_TO_BE_REPLACED

Thank you to everyone for making our Summer Fete on the 29th June 2019 such a huge success. We made … END_OF_DOCUMENT_TOKEN_TO_BE_REPLACED

We received a lovely piece of feedback in the Northampton Chronicle and Echo this week. This was … END_OF_DOCUMENT_TOKEN_TO_BE_REPLACED

St. Christopher's Care Home Northampton was founded to serve the local community in 1951 it must be … END_OF_DOCUMENT_TOKEN_TO_BE_REPLACED