As part of our series of articles on the History of St. Christopher’s, we look at the history of the Old Rectory.

The Reverend Matthew William Frederic Thursby, who was born in 1821, became Rector of Abington in 1847 when he was twenty-six. He was the second son of John Harvey Thursby who owned Abington Abbey, though by the time Fred Thursby became Rector, the estate had been sold.

Up to the end of the nineteenth century, Abington was a tiny village of about 27 small houses or cottages, just below the Church and the ‘Abbey’.

The old parsonage had been one of them but had not been used as such since 1768, so when Fred Thursby became Rector there was nowhere for him to live. The Thursby Estate, which included most of the village, had been put up for sale in 1841 and at that time there had had to be an Act of Parliament to sort out the glebe land from the rest – and John Harvey Thursby had given £1000 to the Bishop for a new Rectory. In 1841, the Rector had been the Rev. Benjamin Winthrop who, in 1833 had married Anne Thursby and or becoming Rector in 1836 had covenanted to resign if the benefice was needed for a Thursby candidate, and this he did in 1847 for Fred Thursby, even though by then the estate had been sold to Lewis Lloyd who had rented the ‘Abbey’ to Dr. Thomas Pritchard for a private mental establishment.

So, in 1847, the Bishop of Peterborough, George Davys, commissioned the Rector of Wootton and the Vicar of Little Houghton to confirm that the Old Parsonage was no longer habitable.

Edmund Law, the Northampton architect, was asked to formulate plans for a new Rectory   on the 14 acre close, now agreed as glebe land, called “Near Fullingdale” and situated a short distance west of the church. The plans were drawn up (Edmund Law would still recognise it today) and the cost was to be £2232 – there was £1000 from the Bishop (presumably that deposited by John Harvey Thursby); £1000 from Queen Anne’s Bounty and some from the sale of trees from the site. An elaborate building was planned, possibly more late Georgian than early Victorian in style and surprisingly small for a Rectory of that time. 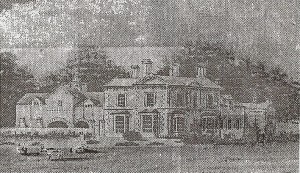 Ironstone from Weston was to be used, with Bath stone for the corbels and quoins (there is a detailed record of all the materials to be used) Over a cellar there was to be a drawing room and a dining room; a study/library; a butler’s pantry; kitchen; scullery and store rooms. Upstairs were eight bedrooms and a dressing room – all recognisable today. Outbuildings included a coach- house, with stalls for three horses, harness rooms and a loft.

Frederic Thursby served his parish but had plenty of time for hunting, travelling and visiting friends.
He has left us his diaries to read!

In July 1848 he married Elizabeth Sophia Beckwith in Knightsbridge in London and brought her back to live temporarily in Great Houghton.

The new house was eventually habitable in August 1849 and they moved in. By then Sophia was pregnant and Emily was born there on November 9th. They had seven sons and two daughters, all born at the Rectory.

By the 1851 census, they had two small children and a staff of eight: two nurses, a cook, a laundry maid, housemaid and kitchen maid, and a footman and a groom (maybe they slept in the coach-house). By 1861, the next census, there were eight children – though the two eldest boys were presumably.away at school – and the staff consisted of a governess, two nurses, a cook and three maids. One wonders where they put them all!

Fred Thursby was always a martyr to ‘flying gout’. In October 1869 he died after a short illness. In his Will he asked that his coffin should be carried to the church by his parishioners and that his family would follow on foot, saying that his large family would need all the money he could leave them.

By the 1871 census, the Rev. Lewis Haig Loyd was Rector, living in the Rectory with his widowed mother, an unmarried sister, a housekeeper and three maids. Later he married and they had four children. From this time the house was of ample size. The Rev. Alfred Longhurst was unmarried and later families were smaller.

Cyril Aldred was Rector from the end of the First World War and we know that at this time the Rectory grounds were used for many parish occasions, Sunday School outings; fetes; sports days: sales of work and so on. We also know that he kept pigs which were fattened up on the Rectory scraps before being returned to Alf Smith for butchering – the meat being a welcome addition to the larder. He also sold the strip of land along Billing Road for houses and let the next five acres for a ‘Sports Ground’.

In 1931 Albert Claude Davis became the Rector and moved into the Rectory with his wife and three daughters. They loved the house and made it a very happy home, adding fruit trees and many shrubs; a tennis court; masses of daffodils and a wonderful rose garden which is still remembered.
Northampton had expanded to make Abington a suburb (though it still felt countrified) and Canon Davis had several curates to train and to help him in the parish. St. Alban’s Church was built in 1938 – to become a parish in its own right – many events were held in the Rectory and the paddock, and the girls had a happy upbringing in a much-loved home. The Second World War brought many changes; the windows were hung with blackout curtains and the wine-cellar became the air-raid shelter (each person having their own special alcove).

It was rapidly becoming apparent that a Victorian “Rectory was too expensive to maintain. Canon Davis died in 1943. The Rev. Herbert Steer followed him and lived in the Rectory until 1949. By that time the sale was underway, so that when the Rev. James Ashworth and his family arrived, the new Rectory was a three-storied, semi-detached house at 7 Abington Park Crescent, the garden backing on to the Grounds of the Victorian Rectory.

Read the next article: The Birth of St. Christopher’s.

Our residents recently enjoyed a Summer BBQ in the gardens of St Christopher's. The weather … END_OF_DOCUMENT_TOKEN_TO_BE_REPLACED

Thank you to everyone for making our Summer Fete on the 29th June 2019 such a huge success. We made … END_OF_DOCUMENT_TOKEN_TO_BE_REPLACED

Thank you to everyone for making our Summer Fete on the 29th June 2019 such a huge success. We made … END_OF_DOCUMENT_TOKEN_TO_BE_REPLACED

We received a lovely piece of feedback in the Northampton Chronicle and Echo this week. This was … END_OF_DOCUMENT_TOKEN_TO_BE_REPLACED

St. Christopher's Care Home Northampton was founded to serve the local community in 1951 it must be … END_OF_DOCUMENT_TOKEN_TO_BE_REPLACED