You are here: Home / History of St Christopher's / The Second Decade

As part of our series of articles on the History of St. Christopher’s, we look at the Second Decade.

By the end of the first ten years, many changes had taken place. The Care Wing was busy and there had been many changes amongst staff and residents.

In 1958 Mr. Alsop had resigned as Secretary and been replaced by Mr. George Moss. In the same year, Canon Ashworth was replaced by the Rev. Charles Roots – one of his suggestions was the provision of a stone plaque outside the front door, to mark the name of the Home and the foundation date; this was put up in April 1960.

Unfortunately, Charles Roots’ service was short and he died suddenly in the same year that the Home lost William Smith, who had shown a very early interest in the project. He had given generously of his time, his advice and many financial gifts. He was a friend of all the residents and enjoyed entertaining them and he was concerned for the welfare of the staff as well as the residents. St. Christopher’s almost became his life and his presence and his counsel were to be greatly missed. It was a time of changes; Sister Reynolds replaced Sister Cooper in July 1959 and was herself replaced in 1960 by Sister Margaret Brown.

The Summer Garden Parties had been a great success to raise money and several ladies met in 1960 to form the “Guild of St. Christopher’s” with. Mrs. Cookson in the Chair. These ladies did a lot for the Home, particularly holding fund-raising Coffee mornings. They were able to equip the lounge with beautiful curtains.

It was reckoned that by now it cost £5.11.0 a week per resident to maintain the Home efficiently. The average payment was now £3.1.0 so there was a weekly deficit of £2.10s per resident. This was made up by those parishes which helped with money and gifts – and also money from legacies and from individuals who covenanted money and those who gave presents, like the new television set; or helped in other ways. A Home, like any home, needs constant attention; a new washing machine, an airing cabinet for the laundry; draught screens for the Care Wing – the list goes on! The gardener, Mr. Jack Battison, had retired and had been replaced by Mr. Ball.

By 1961 a further extension was being considered – there had been a large legacy from Mrs. Ruby Faire; another from Mr. William Smith and from Mrs. Golding and other sums which had accumulated. Various ideas were considered.

In July 1963, Miss Waiters, who had been Matron since the beginning, retired In August. A retirement party was held for her and presentations were made by Miss G. Freeman (from the bungalow residents); by Mr. Fred Whiting, aged 92 and the oldest resident and Miss D. Berrill the assistant matron. Miss Waiters was to be followed by Miss Margaret Brown -‘ both were ex-missionary nurses who had served in China. Irene Walters retired to Suffolk, where she died when she was 81.

By 1965 it had been decided that an extension should be built by the South Wing of 6 bed sitting rooms, bathroom etc. as well as kitchen, laundry and an extension to the dining room. A quiet room was also to be built.

Mr. Hammond was to be the architect. After planning permission, the work went on until October 6th 1967. 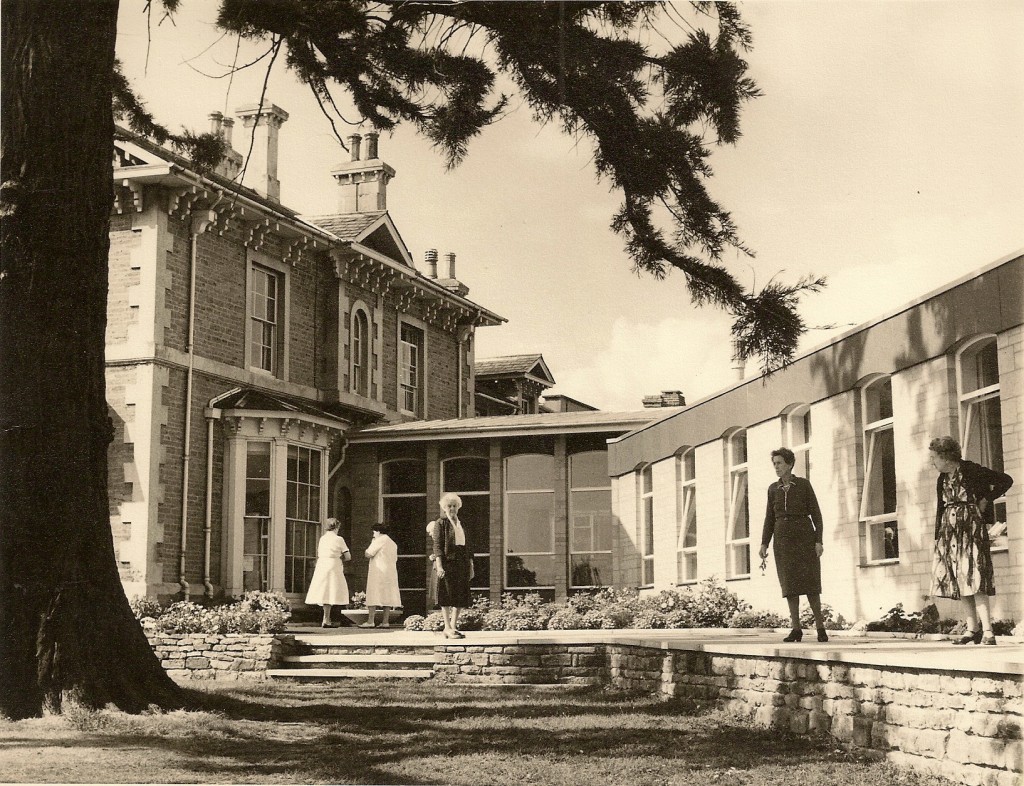 The new wing was to be opened by the Duchess of Gloucester, with a hundred invited guests and with the Lord Bishop, Cyril Eastaugh, to dedicate the wing. The Lord Lieutenant, Lt. Col. D.J. Chandos Pole received the guests and a presentation was made to the Duchess: 93-year old Mr. Brain presented a bouquet and 85-year old Mr. Dommet presented a book on the history of the house. 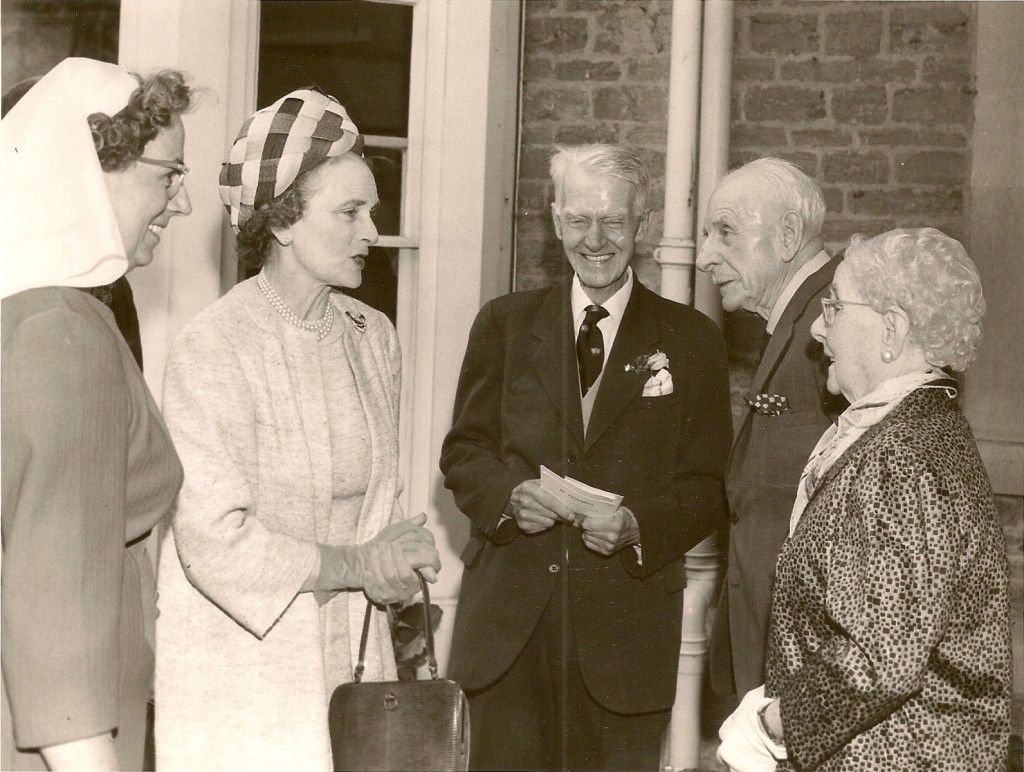 The Mayor and Mayoress (Councillor and Mrs. Dockrell) were present with Miss Walters, the ex-matron and her successor, Miss Brown. The new Archdeacon, the Venerable Bazil Marsh; the Rural Dean, Canon Elcock, were also present with many others. Later the Duchess toured the Home meeting staff and residents, it was a memorable occasion. 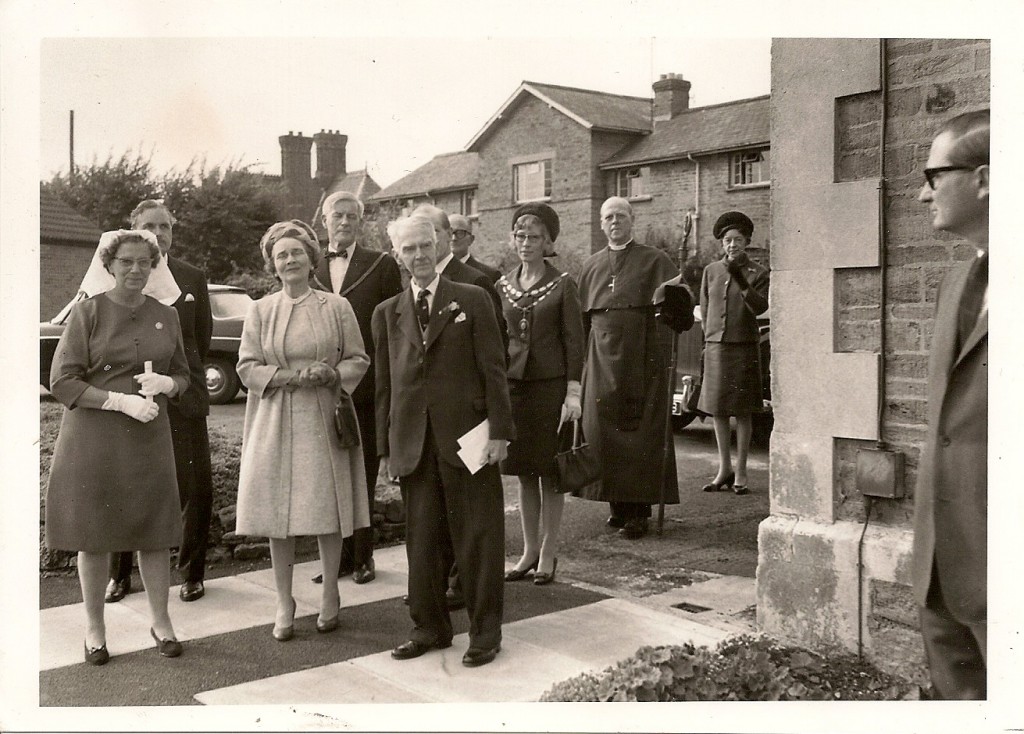 Later still in October, at an Open Day, 250 people visited St. Christopher’s. After the death of the Rev. Charles Roots, the Rev. Stephen Greaves was appointed to Abington but in a sad coincidence he too died suddenly and unexpectedly in 1962 (the same year in which the Rev. C.H. Beedle died). Afterwards, No. 5 Abington Park Crescent was bought for the next Rector – the Rev. Patrick Hamerton – and No. 7 was put up for sale. After much deliberation the Home bought the house, to turn it into five flatlets, as an alternative to building further bungalows, helped by a Nene Foundation Grant.

There were now 48 residents, some had been moved to the new wing and new ones had been admitted. As a further addition to the ‘campus’ in January 1968, Rectory Cottage, just past the annexe, was purchased and adapted as if it were one of the bungalows.

At the end of May 1968, Matron Margaret Brown resigned – and another farewell party was arranged. Another end – but also a beginning.

Read the next article: A Challenge for St. Christopher’s.

Our residents recently enjoyed a Summer BBQ in the gardens of St Christopher's. The weather … END_OF_DOCUMENT_TOKEN_TO_BE_REPLACED

Thank you to everyone for making our Summer Fete on the 29th June 2019 such a huge success. We made … END_OF_DOCUMENT_TOKEN_TO_BE_REPLACED

Thank you to everyone for making our Summer Fete on the 29th June 2019 such a huge success. We made … END_OF_DOCUMENT_TOKEN_TO_BE_REPLACED

We received a lovely piece of feedback in the Northampton Chronicle and Echo this week. This was … END_OF_DOCUMENT_TOKEN_TO_BE_REPLACED

St. Christopher's Care Home Northampton was founded to serve the local community in 1951 it must be … END_OF_DOCUMENT_TOKEN_TO_BE_REPLACED